Holy Week marks the culmination of the Lenten season.  During this time, we are given another chance to reflect on and to re‑live the last hours of Jesus’ life. All the things brought to our mind by the different expressions of piety which characterize these days are of course directed to the resurrection, which is, as St Paul says, the basis of our faith. But we should not tread this path too hastily, lest we lose sight of a very simple fact which we might easily overlook: We will not be able to share in our Lord’s resurrection unless we unite ourselves with him in his passion and death. If we are to accompany Christ in his glory at the end of Holy Week, we must first enter into his holocaust and be truly united to him, as he lies dead on Calvary.

At the sight of Christ bruised and broken — just a lifeless body taken down from the cross and given to his Mother — at the sight of Jesus destroyed in this way, we might have thought he had failed utterly. Where are the crowds that once followed him, where is the kingdom he foretold? But this is victory, not defeat. We are nearer the resurrection than ever before; we are going to see the triumph which he has won with his obedience.

We invite you to join us as we mark the events of Jesus' last days on earth, from his triumphal entry into Jerusalem to his final hours on the cross, all in preparation for the coming of a new day on Easter morning. 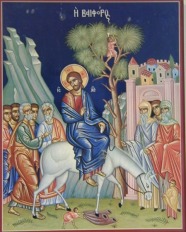 Morning Prayer with the Blessing of the Palms
11.00 a.m.
On Palm Sunday, we remember how the crowds welcomed Jesus into Jerusalem with palm branches and shouts of "Hosannah!"  Yet, we remember as well that a few short days later, those sames crowds would cry, "Crucify Him!"  On this day, Jesus set his face toward the moment of his doom, dying a death that would ult﻿imately be our own salvation.

Our service for Palm Sunday will include Morning Prayer with the traditional blessing of the palms.  Music for this day will include Hosanna to the Son of David by David Halls, O Savior of the World by John Goss, and My Eternal King by Jane Marshall. 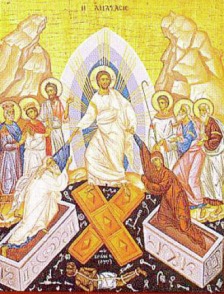 When the women found the empty tomb on Easter morning, they were perplexed. They could not understand what had happened to their Lord.  They were distressed -- until the angel reminded them that of Jesus' promise that he would rise again.

In many ways, we are like those first disciples.  We are like the women coming to the grave that day.  They had heard the promise of Jesus that on the third day, the Son of Man would be raised from the dead by the Powers of God. They had heard his promise to the thief on the cross, “Today you will be with me in paradise.”  They had heard Jesus teach, “I am the resurrection and the life; whoever believes in me will never die.”  Nevertheless, on that morning when they came to the grave, they came expecting death.  But, what they found was life.  Jesus had risen from the dead.  In so doing, he demonstrated his power over the grave.   More importantly, for us, he opened the gates of eternal life to all who would believe on his name.

Join us on Easter Day we celebrate the glorious resurrection of our Lord.   Our service begins at 11.00 a.m. with the celebration of Holy Communion.  Our music director, Bernadette Hoke, leads the choir in various works for Easter, including, He is Risen by Cecil Cope, Christ Our Passover by Will MacFarlane, and Hallelujah, Amen! by G.F. Handel.